Could the cause of your rosy cheeks be more than you think? 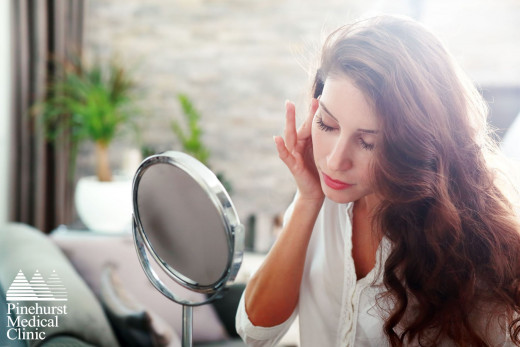 Rosy cheeks, blushing, tickled pink – all terms that have been coined over time as terms of endearment and are usually associated with the color of our face after experiencing an emotion. However, in some, having a rosy complexion could be caused by an underlying skin condition.

Rosacea is a common skin condition that often begins with a tendency to blush or flush easier than other people. It commonly starts between the ages 30 and 60 and is most prevalent in those who are fair-skinned and have English, Scottish, Scandinavian and northern or eastern European ancestry.

With most of the population experiencing facial redness at least once in their lifetime, it doesn’t mean everyone has rosacea. Common signs and symptoms of rosacea include transient redness in response to certain triggers. Triggers can include exposure to ultraviolet light, temperature change, alcohol, exercise, spicy foods, psychological stress, air pollution and tobacco smoking. It is recommended that those with rosacea avoid known, identifiable triggers as well as fragrant lotions, soaps, make-up and skincare products.

In some, rosacea may progress into more persistent redness, blood vessels becoming more prominent on the skin and the formation of red, pimple-like bumps. Burning, itching and thickening of the skin around the nose and eyes have also been associated with rosacea. The condition can also involve the eyes called ocular rosacea. Those with this condition can experience redness, dryness and persistent irritation of the eyes and eyelids.

Although the exact cause of rosacea is unknown, several factors are considered to be possible causes. This includes abnormalities in the blood vessels, as well as microscopic mites that are commonly found on the face. It is believed that genetics, an altered microbiome of the skin and gut, bacterial overgrowth of the small intestine, dysregulation of the immune system leading to excessive inflammation, and an impaired skin barrier can also lead to one developing rosacea.

Treatment for rosacea will depend on which of the four types one may be diagnosed with. There are topical anti-inflammatories such as azelaic acid, ivermectin and tacrolimus and topical antibiotics, like metronidazole, that can be used to control mild symptoms. Certain medications can improve the redness of the skin like brimonidine. If the disease is considered moderate to severe, treatment will usually require oral treatment with long-term low-dose antibiotics like doxycycline. There are also several laser treatments available that can improve the redness and appearance of prominent blood vessels.

If you believe you or a loved one may be suffering from rosacea, it is recommended to see a board-certified dermatology provider as they can help identify triggers and create personalized treatment plans that will prevent flare-ups and improve the skin’s appearance.